Keen of the King

Doctoral student Dustin Brewer, in the department of Earth and Ecosystem Sciences, researches the habitat of the King Rail, a waterbird, with the goal of aiding long-term conservation success. King Rails are a rare, secretive marsh bird in the Midwest characterized by their camouflage-like black, brown, olive, and rusty-toned feathers.  King Rails are a focus of conservation efforts as they are threatened or endangered in 12 states throughout the Northeast and Midwest. 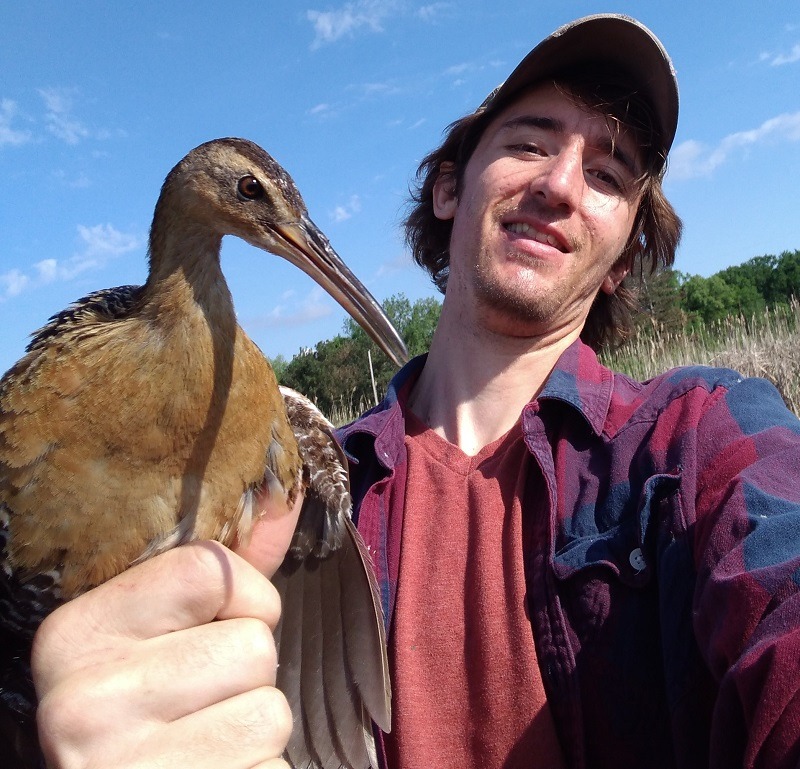 To determine the habitat of King Rails in the Midwest, the birds must be caught, tagged, and tracked. Brewer and his team use radio telemetry to monitor a sample of 10-20 King Rails across the wetlands of northwest Ohio and southeast Michigan, determining the habitat conditions that attract the birds in their home ranges. Radio telemetry uses radio signals to determine the location of something. Brewer also is studying King Rail call-response rates. Biologists conduct playback surveys by broadcasting audio recordings of King Rail calls and record the number of responses to estimate population size. However, traditional playback surveys may be ineffective for rare species such as King Rails. Improving this methodology, by identifying the most effective call types to broadcast, may provide an alternative for conservation managers focusing on King Rail conservation.

As of 2020, Brewer and his team have caught 5 King Rails using walk-in traps with audio lures; once more are collected, he will begin analyzing the data. Furthermore, Brewer predicts telemetry technology might aid in the discovery of King Rail nests. If so, Brewer and his team will have the opportunity to collect some of the first-ever habitat data on breeding King Rails in the Upper Midwest. Through his ongoing research, Brewer hopes to improve biologists’ understanding of the habitat needs of King Rails. If successful, this research will provide conservationists with much-needed information about King Rail habitat requirements.

At CMU We Do Research, We Do Real World